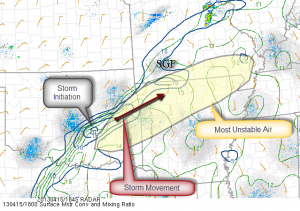 About the southern one half of the Ozarks could see some severe thunderstorms later this afternoon.

A cold front stretches and curves its way through the Ozarks early this afternoon.  Air south of the front is becoming more unstable with CAPE values rising over 2000 now in portions of northern Arkansas. (insert)  This is being aided by more heating as clouds break to the south of the front.

There is also a fairly strong cap in place which will tend to limit storm development.

The front will move very little this afternoon and early evening.  The largest risk for severe weather including large hail, strong winds and perhaps an isolated tornado will lie south of this front.  This area is indicated on the Drawing Board.

The tornado risk is low but not zero.  Much will depend on how unstable the air gets and on any small wave which could develop near the front. This along with a slight increase in the lower level jet might just give a boost to the lowest level wind shear.