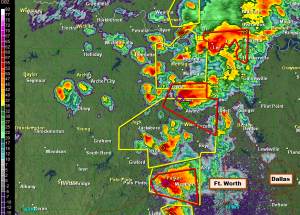 We are all hearing about the devastation which occurred last night in northern Texas as several supercell thunderstorms produced multiple tornadoes.

At last count, six people have been killed. The communities of Granbury and Cleburne were particularly hard hit.

The Granbury-Cleburne storm was tracking to the southeast.  A thunderstorm in general will move along a path dictated by the summation of winds it experiences at all levels of the atmosphere.  Supercell storms possess internal dynamics which allow them to turn away from the prevailing winds, most often tracking slightly to the right of the path taken by other weaker storms.

What this essentially did was massively increase the low-level inflow of this storm to favor violent tornado development.

Another bizarre (but not without  precedence) development with this supercell storm was the nearly ninety degree turn to the left of the tornado toward the end of its life.   Even weather-savvy folks and those meteorologists tasked with the job of warning for this storm had to quickly correct for this movement, which ended up being a beeline for the city  of Cleburne!  If I were living in Cleburne with radar on my desktop, tracking the storm, conventional wisdom would have caused me to breathe a sigh of relief as I watched the storm track south of town on what had been a very consistent heading.

The movement of tornadoes to the left toward the end of their life was documented in the 1960’s by Dr. Fujita (F-scale tornado rating, now enhanced) and others.  Generally, it occurs as the tornado within a larger circulation called the mesocyclone begins to be guided more by that circulation and ends up hooking in front of it to the left.  This is often referred to as an occlusion of the mesocyclone. In the Ozarks, the Pierce City-Battlefield tornado of May 4, 2003 took a slight turn toward the end of its life and sealed the fate of Battlefield.

An occlusion can mean that a new mesocyclone and tornado will form soon somewhere to the east of the old circulation.  That’s assuming the supercell is still in a favorable environment.  I chased such a multiple occlusion in Kansas in 2004, the video of that chase is included below.

It is generally true that this turn to the left is the stage before the tornado dissipates but it can certainly continue to be a powerful twister while this is happening!

Greensburg, KS had a very similar tornado “hook”, the only difference was these storms were tracking northeast. The tornado took out just about the entire town (read more) Just shift the diagram clockwise 90° and you get the same result as Cleburne, TX.

For storms like Cleburne and Greensburg, the tornadoes are so powerful that their relationship with the mesocyclone becomes a bit more fuzzy.

I included a short radar loop I recorded Wednesday evening showing the sharp left turn to the north of the tornado. In retrospect, Cleburne was lucky that the tornado dissipated as quickly as it did!