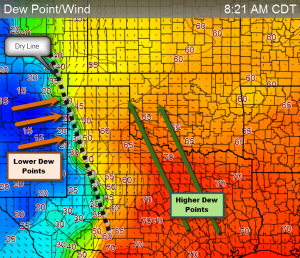 In light of what is developing over the central U.S. over the next few days, I thought I would give everyone a brief description of what goes into severe weather outbreaks and why these upcoming days will be fairly potent.

Let’s start with humidity.  Lots of folks also use the term moisture which to me implies liquid water which is not what is involved.  Humidity is the amount of vapor in the atmosphere. Dew points are used often to gauge humidity.  They are essentially temperatures, specifically the temperature at which “dew” would form if the air were cooled to that point. As I tell my students, the term dew point is somewhat limiting. I think saturation point is more descriptive as it includes clouds, fog and frost as possible phenomenon. Point being that vapor is converted to liquid or ice.

The image I included is a plot of dew points from early on Friday morning. To a meteorologist, this is a somewhat ominous image!  It shows the first real substantial area of high dew points (mid sixties and seventies) this Spring starting to flow north out of Texas . It also reveals a very sharp drop off in dew points over New Mexico.  This feature is called the dry line, it marks a zone of sharp humidity change. It’s movement into the Great Plains is often pivotal to the development of severe supercell thunderstorms.

While the development of this humidity pattern is important, it alone is not enough for severe storms.  The next thing needed is a strong jet stream.  This is going to develop in a rather favorable way over the next few days.

I refer to a strong jet stream pattern as “supercell glue” . An increase of wind with height provides developing thunderstorms a way to separate their updrafts and downdrafts, allowing the storms to sustain themselves for long periods of time.  Also, strong winds aloft tend to “draw up” air over large areas and perhaps aid in storm development. 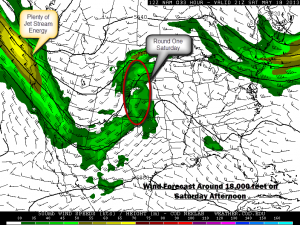 Winds which turn with height are also important in that supercell storms can tap into this to help them rotate. A rotating supercell is a necessary ingredient for strong to violent tornado development.

The set up over the next few days includes a powerful jet stream coming ashore in the western U.S.  What is interesting is the gradual movement and strengthening of jet stream winds into early next week. This is what will continually tap into the unstable air and produce rounds of severe storms.

This represents a rather unique opportunity for storm chasers in that a lot of severe storms, with a rather notable tornado potential, will occur over a few days in a row.

As for the Ozarks, the “show” might start as early as Sunday night with some severe storms primarily in western Missouri. The threat would shift over the Ozarks on Monday. There may even be some concern for Tuesday.