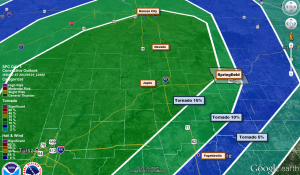 Starting with later this evening, the Ozarks will experience several bouts of severe thunderstorms and heavy flooding rain potential.

This morning, a band of showers is drifting into extreme western Missouri. This is left-over activity from severe weather in the Kansas last night. It is behind a cool air outflow and may pose a small hail or wind threat during the morning hours.

Most of the day will warm, humid and breezy.

Supercell thunderstorms are expected to develop in central/eastern Kansas and Oklahoma by late afternoon and spread eastward, affecting areas of western Missouri and northwest Arkansas by evening.  Large hail, damaging winds and a few tornadoes are expected with this batch storm storms.

The Storm Prediction Center has upgraded all of western Missouri to a 15% tornado probability.  This is a percentage chance of a tornado within 25 miles of where you live.

As is typical, the storms are expected to form more of a line by later in the evening and move deeper into the Ozarks. The line will still be severe at this point with the same threats.  Into the overnight hours, it will tend to weaken much as last night’s activity is weakening this morning.

Springfield will see a threat for severe storms in the 10 pm to 1 am time frame.

A large heavy rain area will set up behind the line during the evening hours. 1-2 inch rain totals are possible with this activity later tonight.

On Monday, this will all repeat itself, perhaps more centered over the Ozarks.  A moderate risk for severe storms exists for this day.

This will be a period where I strongly  encourage you to watch for the latest developments!  I’ll continue to update the situation.