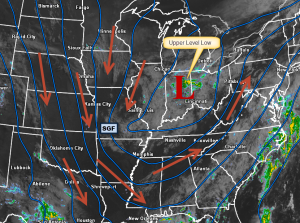 It is already cool for the season and temperatures will cool even more today and for the next several days.

The upper air flow determines the general temperature pattern.  During the summer, it is typical for a ridge of high pressure to park over the western U.S. and occasionally shift eastward over our heads.  The ridge makes it warm to hot if it is overhead.  Example: Phoenix had a high of 119° yesterday.

Starting this weekend and into much of the upcoming week, a trough of low pressure will be slowing moving over the central U.S.   Upper level troughs generally bring cooler weather. Example: a very abnormal cut-off low brought snow to the Ozarks in early May!

Even when temperature do creep back up by the end of the week, I don’t see any nineties on our future for the next seven days.

What might happen is an occasional bout of showers or even some thunder.  This happen yesterday mainly east of Springfield and might happen again today.  This showers activity is connected with small disturbances which will be rotating around the upper level low this week. 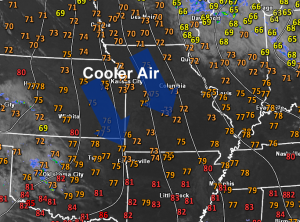 A huge area of high pressure is nosing into the Great Plains. This is producing a flow of cooler and less humid air.

In the upper atmosphere, a low will be developing and backing up a tad over the central U.S. this weekend and next week.

The result will be highs only in the seventies for several days in a row.  We will also see a few fifty-degree mornings!

Rain chances are not very high. A few random afternoon showers may pop up on Sunday. Otherwise, the forecast is pretty dry. 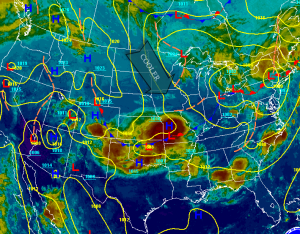 After some wild winds overnight, the much advertised cool down will arrive this weekend.

Overnight, winds up to 70 mph (but mostly in the 55-60 mph range) were reported across the Ozarks.  City Utilities reported powers outages in a few locations in Springfield.  There are also reports of trees down in a few spots. Here is my video review of radar and storm reports recorded around 2:30 a.m.

While cooler air is coming, it will take steps getting here.  Today, we will be cooler than Thursday’s 96° but still record a high near ninety.

The real temperature effect will kick in over the weekend. We’ll spend Saturday and Sunday in the seventies during the late afternoon.

Much of the same can be said for next week.  A large upper-level low will slowly travel westward over the northern and central U.S.  This will keep us cool for the season.  Highs will probably only reach into the seventies during this time. Lows will drop into the fifties a few mornings next week!

Afternoon showers and even a thunderstorm cannot be completely ruled out.  A few showers/storms could be around in eastern Missouri over the weekend and possibly into a portion of the Ozarks as well.

By this time last year, the 100 degree heat had begun, a pattern which would last all summer.

By comparison, I have a significant cool-down in the forecast which will put readings more than 20° cooler than last year for the closing days of June 2013.

Here is a neat little slider I put together to easily compare the two months. I’ll update this chart daily, it will be more striking by Monday! 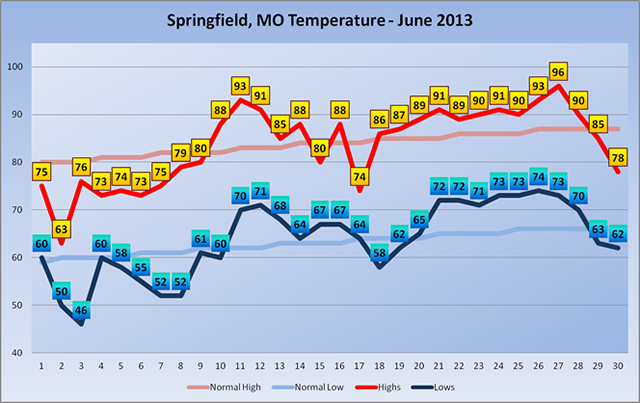 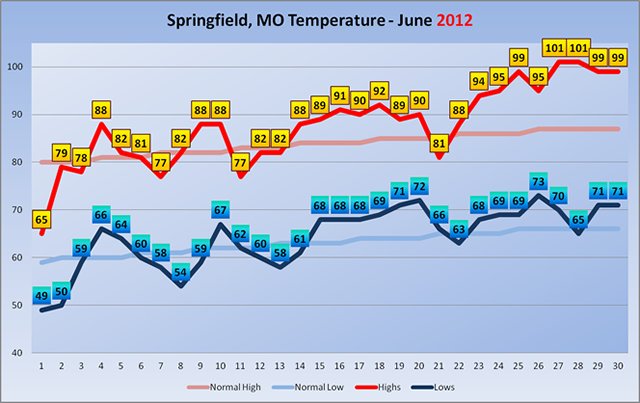 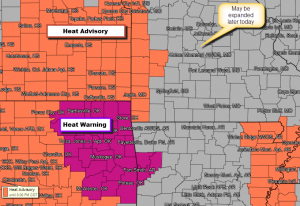 We’ll have a rather significant change in our weather pattern settle in starting this weekend with much cooler air expected.  More on that below.

Before the cool air gets here, we’ll experience the hottest day of the year in the Ozarks today.  We have been steadily increasing the temperature this week but the humidity has remained moderate and a healthy breeze has been in place so the heat has been somewhat easy to take.  Today will be hotter and more humid especially in western and central Missouri.  In these areas, the actual temperature may get into the upper nineties with heat index values in the lower 100’s. A Heat Advisory is in effect for those areas today.

Next, the attention turns to an increasingly unstable atmosphere developing out over eastern Kansas this afternoon. It looks like a good batch of thunderstorms will eventually take shape over this area and have legs into the Ozarks by late evening, lasting into the overnight hours.  This activity will bring damaging winds to a portion of the Ozarks. It may take the form of a bowing segment of storms.  This will be monitored through the day.  I’ll post special blogs and/or videos later today on this threat.

After the rain clears out Friday morning, we start down the path of a much cooler pattern of air.  A low in the upper atmosphere will take up residence over the central U.S. this weekend and also into much of next week. 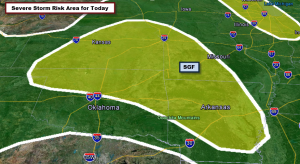 As a result, we’ll have temperatures about ten degrees below normal for a few days which translates into highs only in the upper seventies.

Saturday may only see highs in the middle seventies upstate as a batch of clouds swirls around the backside of the low pressure feature.

While tonight is by far the best chance for rain, a few afternoon showers cannot be ruled out on Saturday north and east of Springfield. In fact, this also applies to the late afternoon hours of any of the days coming up.

I’ve been on a mini vacation since Sunday and only blogging as a result. Full video production resumes today!  Stay alert this evening for storms and check in! 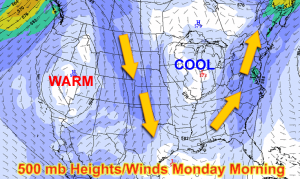 A shift in the traditional placement of summertime upper air features will mean a cooler pattern of air for the Ozarks which will probably last until the Fourth of July.

The heat so far this June has been fairly manageable. We hit 91 three times so far for our hottest temperature. Today and Thursday however will exceed that reading. Thursday will be the hottest day as we head into the middle nineties over the Ozarks.

But cooler changes are in the works.  The insert shows a dipping south of the jet stream winds over the eastern two thirds of the country by early next week. This type of pattern provides cool air at the surface for much of the U.S.

We’re talking about high temperatures only reaching the lower eighties on Sunday and Monday.

What about the transition?  Well, some rain and storms still look probable for at least a part of the Ozarks.  This rain chance still looks most likely late Thursday night and into Friday.

Other rain chances include over the eastern Ozarks later today and also with another disturbance late in the weekend.

Our weather lately has featured slightly hot conditions with moderate humidity but a good breeze. All in all, pretty manageable for late June.  A trend toward cooler temperatures will start this weekend.

The random storm chances have greatly diminished and will remain low today as well.

But the first of a few disturbances coming at us from the northwest will begin to increase the storm chances on Wednesday then again on Friday.

The activity on Wednesday will be most widespread east of us in eastern Missouri and on into Illinois and Indiana,  The tail end of this storm area will move through the Ozarks. Some of the storms could have a slight severe edge to them on Wednesday,

We’ll be back in the heat Thursday.

On Friday, a front will be hung up in the area and with another disturbance approaching the  chances for rain and storms goes up. This is probably the best chance for widespread rain in the forecast.

Starting this weekend, the air will become less humidity and slightly cooler, Thus will into at least the early portion of next week. I expect highs only in the lower or middle eighties during this time! 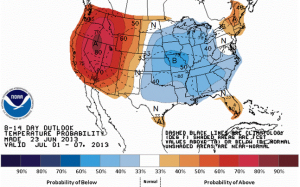 Cooler for the Fourth of July?

We are in full summertime mode with moderate heat, lots of humidity and an occasional storm threat.

Expect highs in the nineties for the next several days.  This will be accompanied by a decent southerly wind today and Tuesday.  I think our highs will climb into the lower nineties on each day.

On Wednesday, a weak disturbance will try to send some thunderstorms our way.  This would come in the form of an east-west line of storms which will develop and then sink south into the Ozarks late on Wednesday.

Some models suggest a slight wind-shift behind these storms for Thursday. It wouldn’t amount to very much cooling.

It does look like a gradual pattern shift will take our temperatures down by the weekend and early next week. 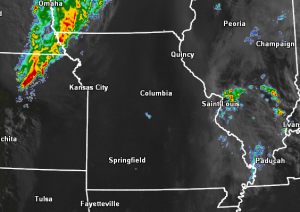 The Ozarks will continue to see weather fitting for the last week of June, just a tad on the hot side with average humidity.

Like yesterday, the chance for a random shower or thunderstorm is not zero.  The remnants of cool air outflows will be responsible for lifting the warm and unstable air during  mostly the p.m. portion of the afternoon.

The area will come under the increasing influence of a stronger ridge of high pressure aloft which will have the effect of snuffing random rain chances out even more by around Tuesday and Wednesday.

This time of year, an occasional surprise storm line will try and make a run into the Ozarks from the north.  They usually lose their steam quite a bit as they come in as they will be bucking against warmer air aloft and a general flow from the south.

I expected consistent highs in the lower nineties on Tuesday, Wednesday and Thursday.  Thursday look like the hottest day.

It appears is if a trough of low pressure aloft will try to establish itself over the eastern U.S. starting this weekend.  This would send a cool front through the Ozarks around Friday.  This would either be a clean break to a slightly cooler, less humid air-mass or bring us a period of rain and storms, depending on how the front takes shape. All of this would be on tap for next weekend. 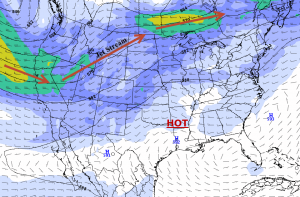 A fairly steady pattern of weather is in my forecast for the weekend and into much of next week featuring average high temperatures in the lower nineties.

The air over the Ozarks is humid and unstable so an occasional shower or thunderstorm can’t be ruled out. But the chances seem pretty small.  This being stated, the possibility is perhaps highest  for today and Sunday afternoon. With nothing but old outflows and a broad, weak disturbance aloft, it’s impossible to nail down where a slightly better threat for rain in the Ozarks exists.

On Monday through Wednesday, the small chance for scattered storms becomes even smaller.

The warmest temperatures should be Tuesday – Thursday with highs in the lower nineties.

A cool front appears to have legs by late in the week, supported by a change in the jet stream flow.  Best estimate on the front’s arrival would be Friday.