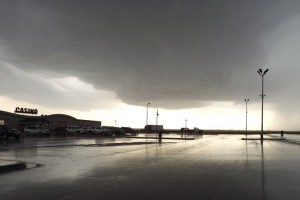 Rotation in Storm Near Bridgeport, OK

My guests on this chase tour were Bryan Snider from Phoenix, AZ  and Jeff Bowers from Springfield.  Jeff and I left Springfield around 9 a.m.  Bryan flew into Tulsa the day before and we picked him up along the way.  My thanks to both of them for the support, documentation and navigation help during this storm chase tour!

Anyone who is familiar with my blogs knows I avoid metropolitan areas while storm chasing.  I had no idea how much this philosophy would pay off on this day.

This chase consisted of a series of well-timed moves. We know the trouble would start somewhere west or northwest of the Oklahoma City.  We went down to Chickasha, OK and hung out just west of town a bit. This is when we first noticed some storm towers trying to poke through the cap. A cap is a warm layer of air aloft which tends to limit or prevent vigorous thunderstorm growth. A cap can be broken by daytime heating or by air being forced up through it.  It was apparent these first attempts were collapsing. It was also apparent that in about an hour, the cap would break.  This stop is where the first videos, pictures and time lapses were taken.

We then headed west to Anadarko, OK to get better aligned with the building cumulus towers.  More checking, more adjustments.  We headed north toward Binger, OK.

As we got to Binger, the first storms became visible.  Instead of the tops getting squeezed off by the cap, we now had a full-fledged storm with a base staring back at us!

While moving north, we had a choice to make: left would put us through Binger and on to Bridgeport on Interstate 40 while right would take us more northeast. I decided, based on what I was seeing, to take the slightly more westerly route northward. 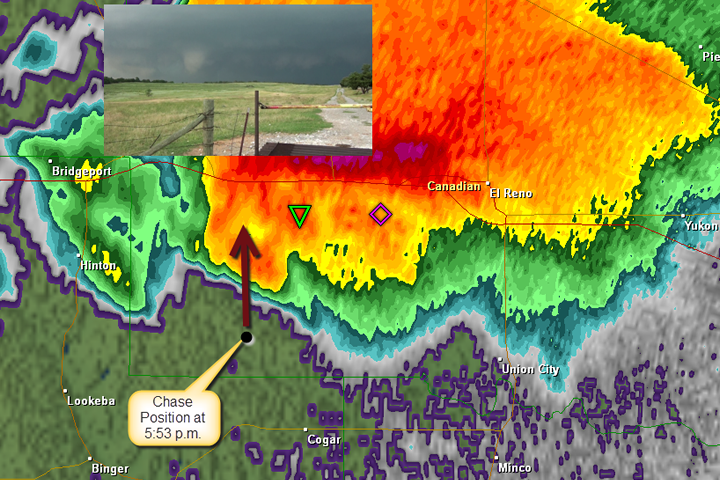 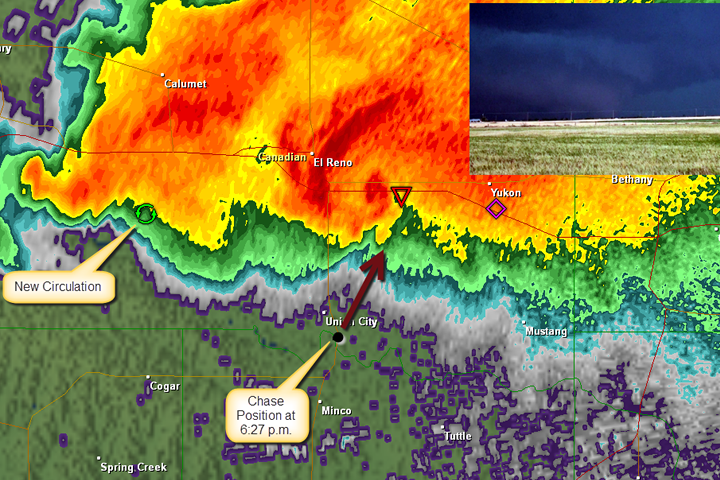 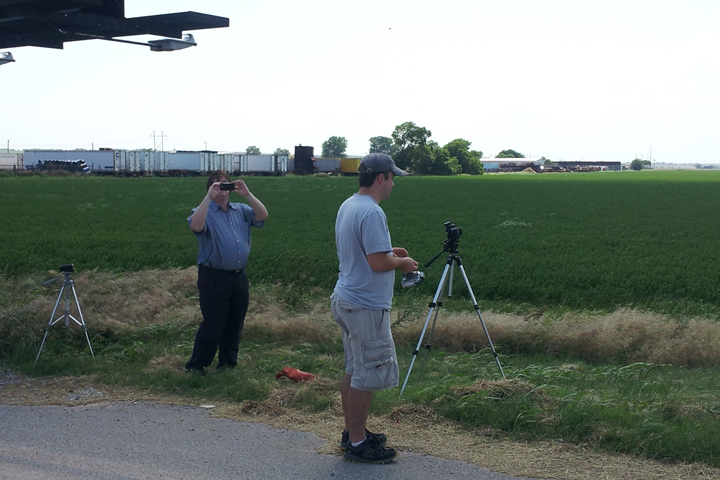 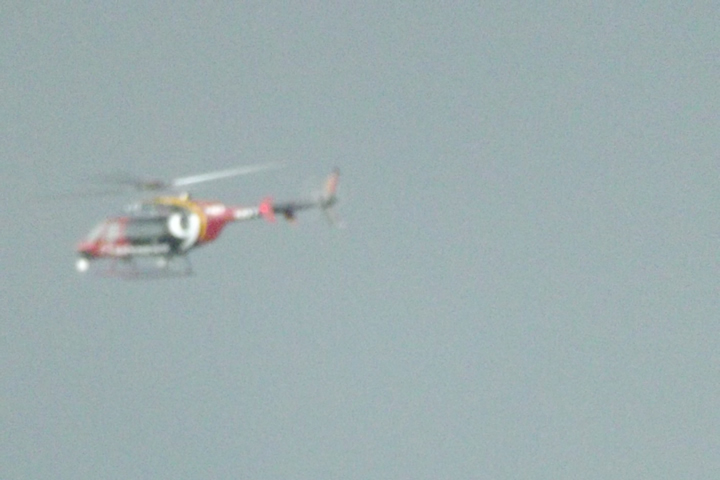 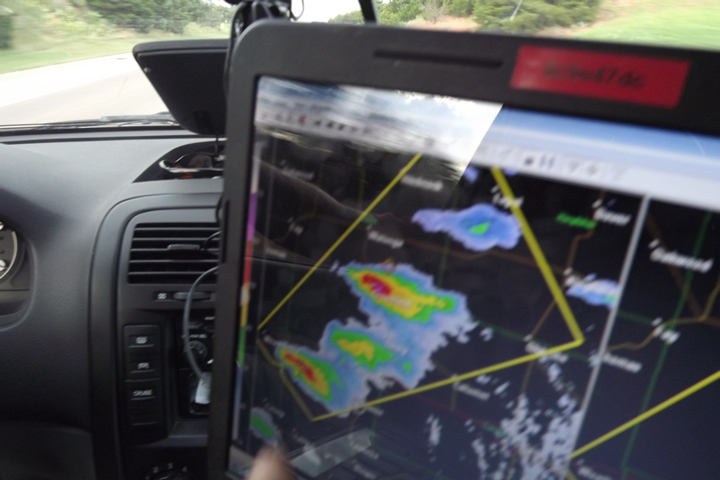 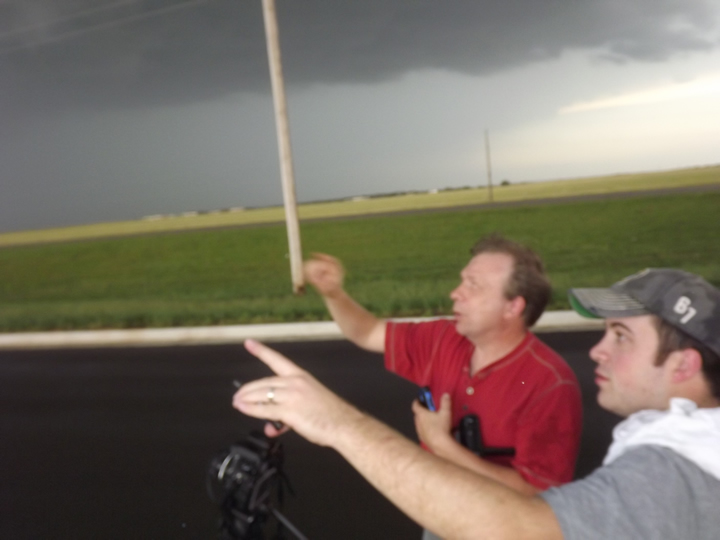 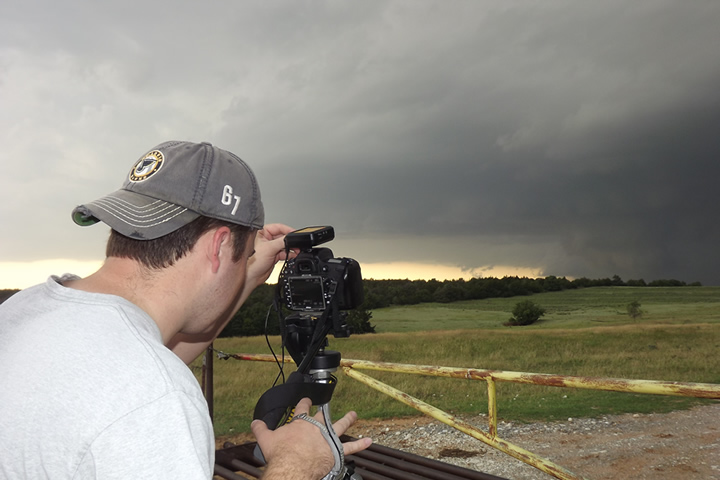 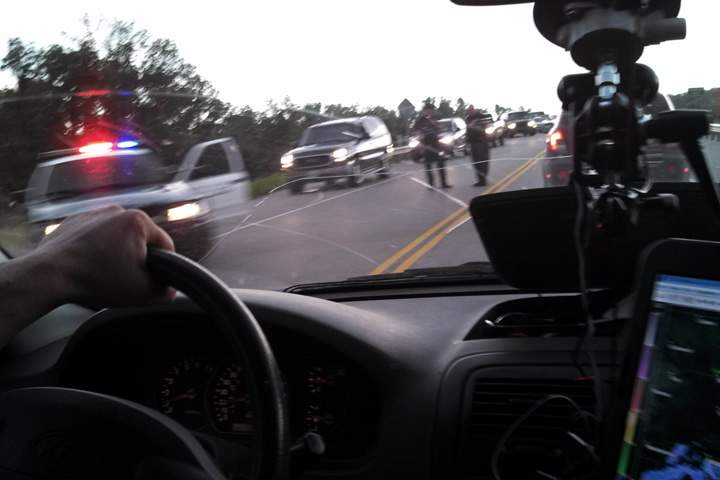 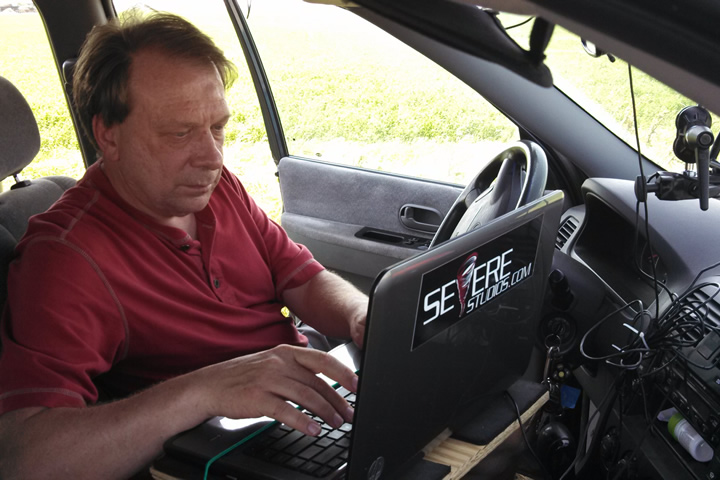 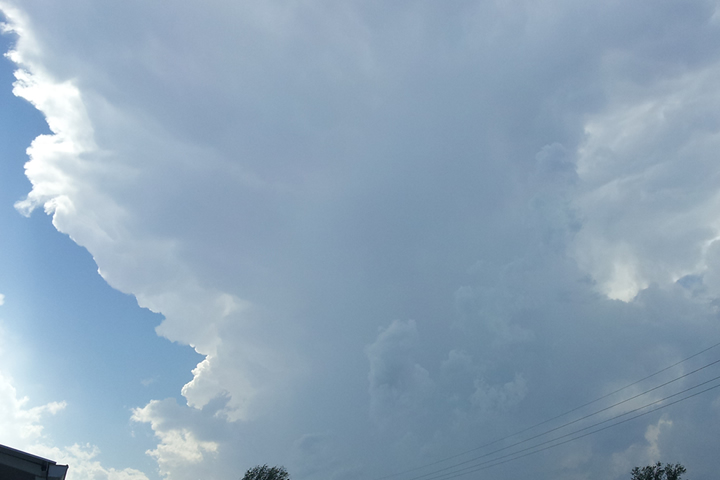 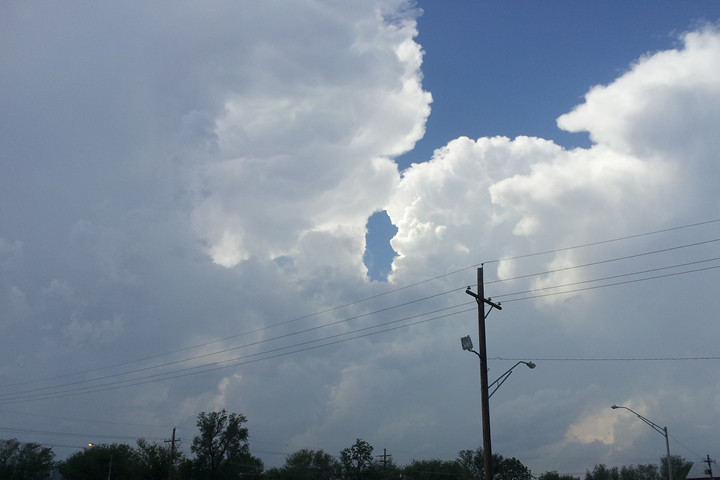 binger2_slide
Another Shot of Storms NW of Binger 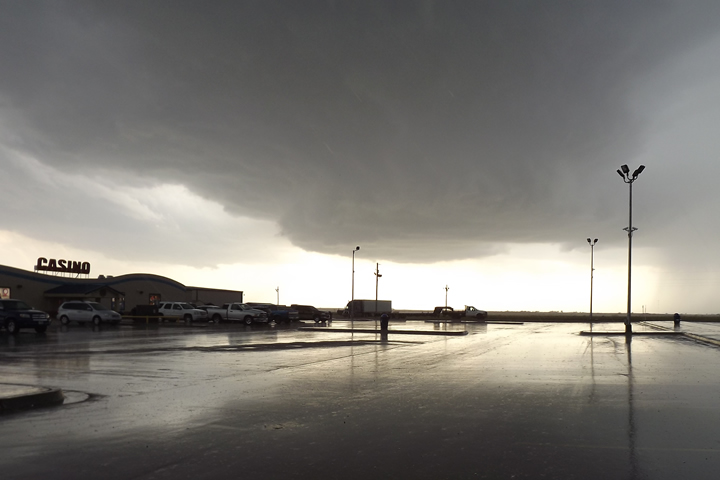 The very interesting stuff starting happening while sitting in a casino parking lot just south of I-40 near Bridgeport. There were three cells on radar, which went under a severe thunderstorm warning shortly after our arrival. The southern most cell started to take over.  I’m pretty sure we were looking at the beginning rotation of what would eventually become the El Reno tornado. (see phot0)

Going east on I-40 wasn’t really an option given the eventual ESE motion of the storms. We decided instead to backtrack south to Hinton, OK and then to “stair-step” southeast, staying south of the storm. This also had the advantage of keeping south of the Canadian River and therefore good exit option south.

We stopped to try and see what was obviously a strong tornado developing (radar rotation very tight) to our north near I-40 but we just couldn’t see it through the rain! We did see a television helicopter flying back and forth along the southern edge of this storm.

Eventually, we ended up over on highway 81 south of Union City.  I check radar storm motions carefully and decided we could drive north just a bit toward Union City.  The next stop we made allowed us to see the Union City tornado to our NNE.  Once again, poor contrast and lots of rain prevented a clear view of this dangerous storm.  I’m told this afternoon that Bryan could see the tornado with the footage he shot and I’m anxiously awaiting this view of the storm!

Now, we decided as a group that further pursuit of this tornado was simply not an option as it was heading for Oklahoma City.  About then, we noticed a new circulation developing to our northwest.  We focused on getting in a good position to see this storm should it develop more.

In part two, I’ll talk about the second circulation and about the mass exodus out of the Oklahoma City metro area.

Also, a video review is in the works along with more pictures for the slide show.