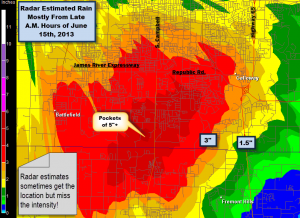 A very small area of southern Springfield received 9″+ of rain in only a few hours during the late morning hours of Saturday, June 15, 2013. This caused extreme flash flooding.

The rain storm caused the Springfield National Weather Service office to issue its first Flash Flood Emergency for the city. This is a special category above and beyond the Flash Flood Warning, reserved for times when a combination of extreme flooding and a major population areas overlap.

The enclosed map indicates the distribution of the rain fairly well but is off on the rain totals. This is not surprising given the intensity of the event.

In the hours leading up to this rain “event”, I remember commenting on the random nature of expected rain and thunder areas expected and that somewhat heavier rain might be expected.  It was a hard forecast to nail down because unlike the approach of a front which has a definite structure and somewhat more predictable movement, the features controlling the rain burst on Saturday were much more subtle.

One of those features was what is called an outflow boundary, a mini cool front of sorts which is produced by the cool air rushing out of a thunderstorm or storms.  On Saturday morning, such a outflow was traveling south over southern Missouri and eventually passed just south of Springfield during the late morning hours.

Some outflow areas are good at providing a sort of gentle push up in the atmosphere and can actively generate rain and/or storms behind them. I commented on this during Saturday mornings’ “One Minute Weather” discussion!

On Saturday morning, this lifting of the air persisted.  At my house, I heard of lot of thunder and witnessed cloud-to-ground bolts. Since I had just developed a new lightning image feature on this web site, I was actively warning outdoor folks about the lightning and encouraging them to check the map. 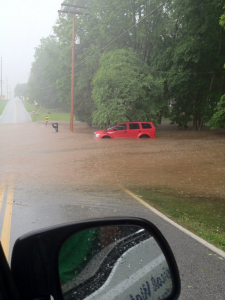 It rained, the rain got heavier but it was all within what I thought was possible on that morning.

There were other contributing factors for heavier than normal rain on this morning. The jet stream winds or overall steering currents were on the slow side. This meant that storms were going to move slowly on this day. All else remaining equal, a slow moving storm will always dump heavier rain. It simply has more time to do so over any given spot!

Also, the humidity over a deep layer of the atmosphere was high in a “plume” which arced from Texas , over the Ozarks and on up into the Midwest.  These “plumes” of higher humidity lead to rain and storms which have higher rain efficiency.

Finally, the ultimate slow moving storm is one which doesn’t move at all!  This is what happened on the south side of Springfield as a storm with a high rainfall rate parked over one location. As a result, the rain totals went through the roof! (literally and figuratively)

By the way, stationary movement is more likely during the summer months when upper level winds are much slower. It becomes possible for a balance between these weak winds and the development of new storm cells to be reached so that the net propagation of a storm is nearly zero. It doesn’t move!

This leads me to the next point and a question, “Will a weather forecaster ever think that 9″ of rain is possible in only a few hours time?” Answer: possible, maybe. Forecast? Probably not. 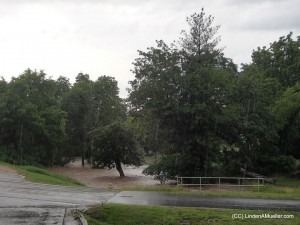 Near Cardinal Toward Woodhaven (Linden Mueller)

This is because events like this occur in very small scales of space and time.  They are controlled by smaller scale features that are either missed or under-forecast.  The computer models we so often reference are not always going to see these features.  Even if the models were capable, we don’t have enough detailed observations often enough. The models would also have to be run over a smaller area to pick up the details needed.  All of this is possible but we’re not there yet!