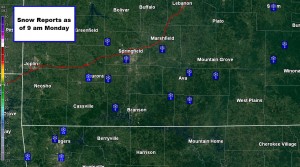 A storm which started as light sleet and freezing rain changed to snow and dumped over a half foot in portions of the Ozarks.

Springfield officially received 4″ of snow from the storm.  Amounts closer to 5″ were reported from Ozark and Nixa area.

By far the heaviest snow took place in a band across extreme southern Missouri. 6-7″ totals were common stretching from around Cassville to Mountain Grove. A few 8″ totals have been reported too.