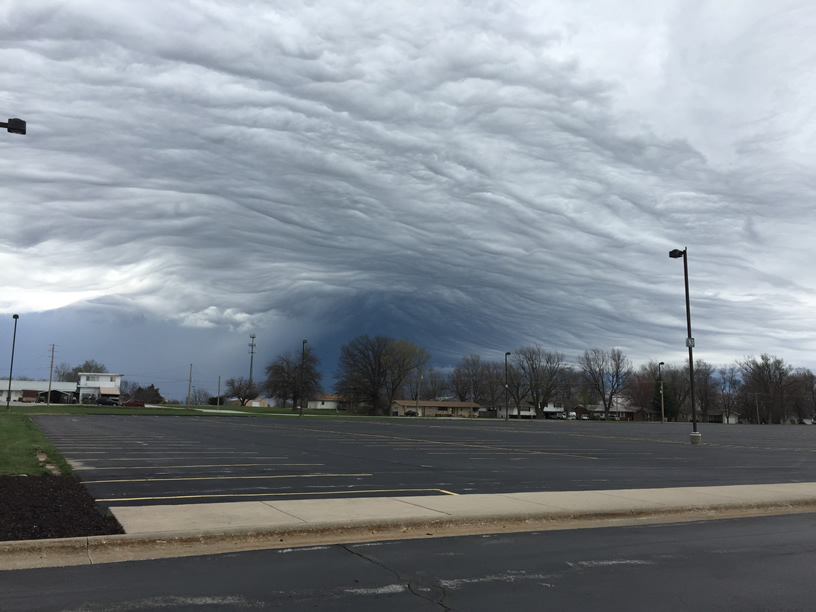 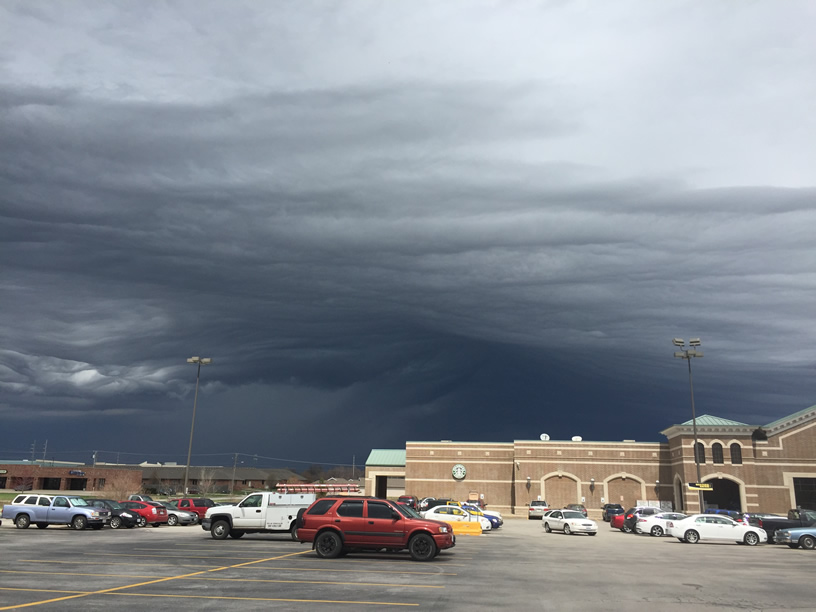 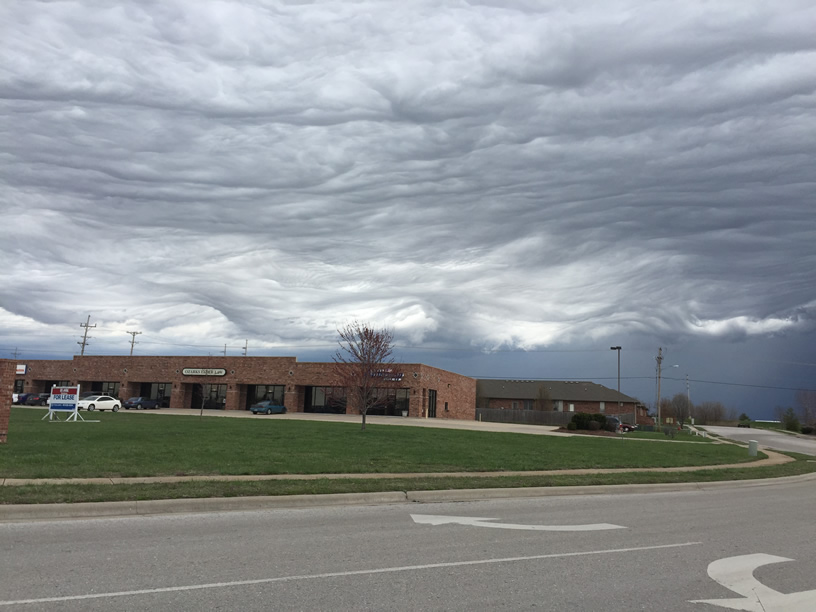 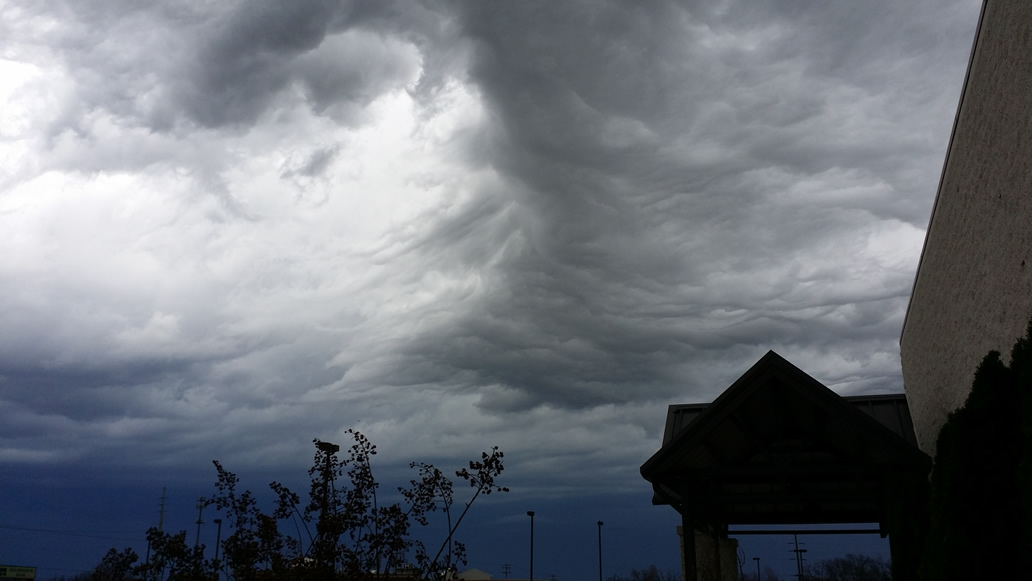 Smooth and wavy clouds were common in the area this afternoon as isolated storms moved through the area.

The cloud type has an official name: Undulatus asperatus

If they look like waves on an ocean, well, that’s actually a good way to look at it!

Dry air near the surface limits cloud development near the ground, allowing us to see the turbulence in the clouds higher above.

It’s where the clouds touch the dry air that reveals the waves and turns in the airstreams above.

They don’t always mean severe weather but do often reveal turbulence in the upper atmosphere often connected to strong storms. 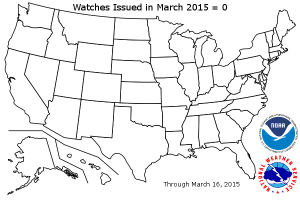 Severe weather hasn’t been very widespread this year in the U.S. and the Ozarks have been quiet too.

Through March 19th, we haven’t had any severe thunderstorm or tornado warnings in the Ozarks. This is certainly good news and not too unusual for our area.

But the U.S. has been quiet too.  Only about 20 tornadoes have been reported since January 1st. This is far below the 10 year average of 130 tornadoes for the same period.

The jet stream pattern holds the key to understanding the lack of severe storms.  The entire eastern and central U.S. has been in a persistent pattern of strong cold fronts diving far south. This has prevented the development of areas of warm and unstable air necessary for storms.

It’s actually not too unusual to have tornadoes in the deep south in winter but the pattern this year has mostly shut this down.

Edited from a press release from NOAA:

NORMAN, Okla. During a month when severe weather typically strikes, this March has been unusually quiet, with no tornado or severe thunderstorm watches issued by NOAA’s Storm Prediction Center so far. And, National Weather Service forecasters see no sign of dramatic change for the next week at least.

“We are in uncharted territory with respect to lack of severe weather”, said Greg Carbin, SPC’s warning coordination meteorologist. “This has never happened in the record of SPC watches dating back to 1970.”

Since the beginning of 2015, the SPC has issued only four tornado watches and no severe thunderstorm watches, which is less than 10 percent of the typical number of 52 tornado watches issued by mid-March. The approximately 20 tornadoes reported since January 1 is well below the 10-year average of 130 for that time period.

There is no one clear reason to explain the lack of tornadoes, Carbin said. “We’re in a persistent pattern that suppresses severe weather, and the right ingredients — moisture, instability, and lift — have not been brought together in any consistent way so far this year.”

Forecasters expect a change soon, however. April and May are typically the busiest months for severe weather and tornadoes. Patterns can change in a few days, Carbin said, and it’s important to be prepared for severe weather when it occurs.

Analysis of the ten lowest and ten highest watch count years through the middle of March reveals little correlation to the subsequent number of tornadoes through the end of June. For example, early 2012 was particularly active with 77 watches issued through mid-March. The subsequent period through the end of June was unusually quiet for tornadoes with about 130 fewer EF1 and stronger tornadoes occurring than what would normally be expected. On the other hand, 1984, with a relatively low watch count of 28 through mid-March, became more active and by late June had about 100 EF1 and stronger tornadoes above the long-term mean of 285. 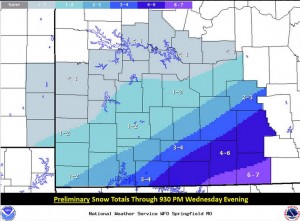 The Ozarks received measurable snow in early March with the heavier totals far southeast of Springfield.

Springfield’s official measurement of snow was 1.2″ in this latest in a series of winter storms.  The Springfield area and Greene County picked up on average 1 to 2 inches of snow.

Snow totals were somewhat higher southeast of town in extreme southern Missouri where three to perhaps as much as four inches were reported.  Northern Arkansas got the most snow with 6-8″ totals common.

Here is a list of the snow reports by city in the Ozarks:

The snow started as sleet early on Wednesday morning and then quickly turned to snow in Springfield by mid-morning. Most of the accumulated snow fell in the morning and early afternoon.  Areas far southeast of Springfield had snow accumulations well into the evening hours.

Springfield now has a season total of 15.8″ of snow.  12.1″, or just over a foot, of the season total fell in the second half of February!  Curiously, 1.7″ fell in November, beating both December and January’s totals.