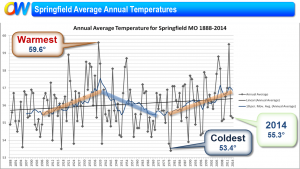 The preliminary temperature data for Springfield for last year is in and we were cold.

Out of 127 years of record keeping in Springfield, our average temperature was 55.3°,  This works out to be the 40th coldest on record.

The graph above shows the annual average temperature for the past 127 years.  Also indicated on the chart is the linear temperature trend and the 10 year running or moving average.

It’s interesting to look at this annual data.  While I put a linear fit line on the graph, one should note that the R-squared value is .02 which is awful for expressing anything meaningful for noisy and non-linear data such as this. 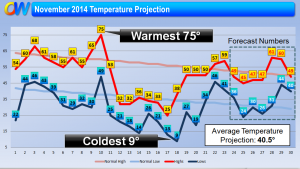 Despite highs in the seventies on the final two days of November, Springfield managed to place 9th coldest on record.  We recorded an average temperature of 40.9°.

Thanks to a long-lasting cold wave in the middle of the month, November is projected to rank in the top ten coldest on record in Springfield.

While the cold stretch only broke one record low, several cities in the Ozarks experienced record cold highs from the period of the 11th through the 18th.

It will be remembered for one of longest stretches of high temperatures below 40° recorded in November since records began in 1887.  Springfield pieced together seven such days this November which ties runs in 1937 and 1898.  The cold snap in 1937 was colder but like this years, it occurred right before Thanksgiving.  Be sure to look through the images above!

I projected our temperatures forward to Sunday, November 30th, and we are coming in with an average temperature of 40.5° for November  This would be a tie for 8th place in the top ten coldest Novembers on record if the forecast numbers are accurate.

Any slight warming above the forecast numbers could just bump us out since the numbers are crowded around 9th and 10th place.  Nevertheless, a cold middle of the month anyway you look at it! 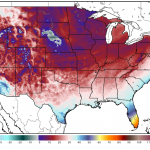 Record lows were broken in the Ozarks this morning as the area begins to pull out of the wave of cold air which arrived last week. 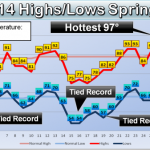 The average temperature in Springfield for July 2014 was 74.2° which is the 9th coolest in the books. Records have been kept for 127 years. 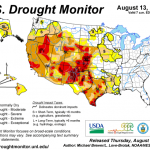 It’s not too hard to see why the drought has been eliminated over the Ozarks as seen on the latest Drought Monitor update.  Just compare the drought map to the rainfall accumulation over the past thirty days.  The rain belt matches the non-drought belt pretty well! The weather pattern has changed since that wet period […] 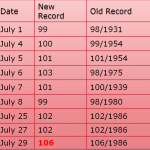 I’m sure you remember but last July was hot!  The month registered 12 one hundred degree days (17 total for the summer). There was also a crop of record high temperature in July of 2012: By sharp contrast, July of 2013 contained no one hundreds and no records. We had several hot spells but finished […] 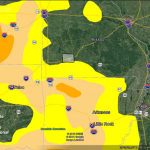 A batch of decent rain tonight coupled with more later this week and weekend could be just what the doctor ordered for portions of the Ozarks. I put together this slider to easily compare the latest drought index monitor with a projection of rain over the next five days. You can check the latest drought […] 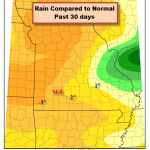 The latest Drought Monitor (July 16th) verifies what we already know, our summertime rain has dropped off. Drought has come back to a portion of the Ozarks. 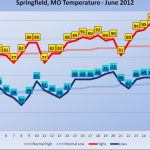 March Comparisons: 2012 vs. 2013 March 2012 was a record warm month for Springfield.  We experienced four eighty-degree days and about half of the month had highs over seventy. March of 2013 will average out quite cool with a snow total of 4.3″! Here is a neat slider I put together comparing the two months: