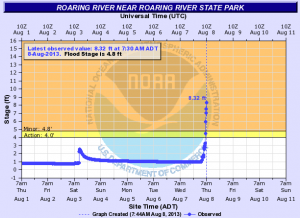 The area of heavy flooding rain has shifted south as of the early hours of this Thursday morning.

Just over 6.5″ of rain has been logged at the Branson Airport overnight (still raining).  Much of this fell in a two hour period.  This rush of water flowed north along Turkey Creek into Hollister. The water rose rapidly there, several RV’s were reportedly washed away and the situation is still unfolding.

Meanwhile, the river gage on the Roaring River in the park of the same name in Barry County swelled to 8.31 feet as of 5:30 a,m. and is guaranteed to rise much more as another round of very heavy rain is about to impact that area as of this writing (6:30 am). 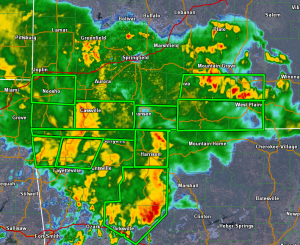 The heavy rain will continue all day!  Please stay safe. I’ll have more timely updates on Twitter and Facebook throughout the day. 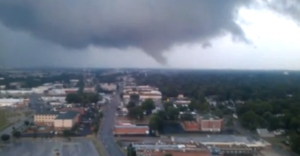 Much to the surprise of *everyone*, a small tornado touched down in Springfield this Sunday evening, July 21st!

I first noticed a storm report of wind damage plot on my radar software earlier this evening. The National Weather Service said they would investigate.

Turns out that the damage had a track.  This was verified by video posted on Dan Difranco’s Facebook Page, showing a condensation funnel.

Here’s a link to that video:

Here’s another showing a lowering (trees block lowest portion) on the Instagram page of Joshackworth: 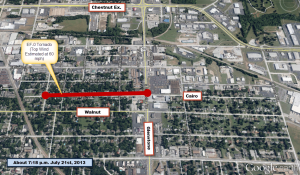 Here’ s the report from the Springfield National Weather Service:

Susan Jurgensmeyer, who lives 2 blocks east of Glenstone and Cairo describes it: “I heard the wind, the walnut tree in the neighbors yard was really swaying, and the wind sounded really loud and just came on real fast. It was over in a few seconds, it seemed like.”

This tornado was undetectable on radar.  It  occurred under the updraft of a developing storm.  Radar shows no evidence of rotation that can be distinguished from “background noise”   The echo itself does have a sort of broad “hook” on it which is visible post-storm but would have defied detection in real-time. 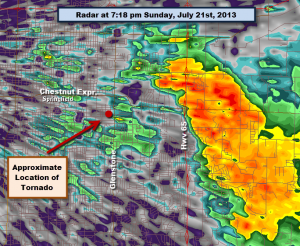 Hires radar at About the Time of the Twister

Here’s my radar review. I’ll have more detail on Monday when I receive the high-resolution data: 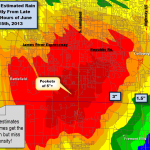 A very small area of southern Springfield received 9″+ of rain in only a few hours during the late morning hours of Saturday, June 15, 2013. This caused extreme flash flooding. The rain storm caused the Springfield National Weather Service office to issue its first Flash Flood Emergency for the city. This is a special […] 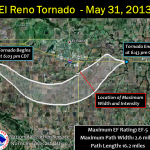 Tornado intercepting, media reporting, storm gawking, storm chasing, storm tours, storm research and storm spotting ; all of these activities involve being in the field or on the road and close to severe thunderstorms and tornadoes.  But what are the differences?  And what is considered “close”? Let me start with storm spotting. Storm spotters form the backbone of […] 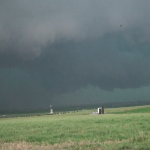 Now I’ll discuss what we saw at our new position as another circulation developed to the WNW. I’ll also tell you about an exodus out of the Oklahoma metro area! 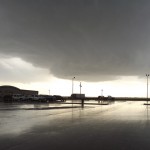 My guests on this chase tour were Bryan Snider from Phoenix, AZ  and Jeff Bowers from Springfield.  Jeff and I left Springfield around 9 a.m.  Bryan flew into Tulsa the day before and we picked him up along the way.  My thanks to both of them for the support, documentation and navigation help during this […] 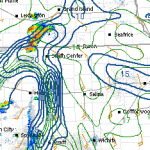 The chasing tour went out to Kansas on Memorial Day. Our choice for developing storms didn’t pan out as well as areas north of our position. 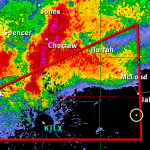 The Moore/Oklahoma city was the single most devastating storm I have tracked while storm chasing! 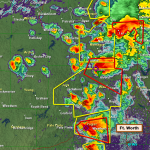 We are all hearing about the devastation which occurred last night in northern Texas as several supercell thunderstorms produced multiple tornadoes. At last count, six people have been killed. The communities of Granbury and Cleburne were particularly hard hit. The Granbury-Cleburne storm was tracking to the southeast.  A thunderstorm in general will move along a path […]

[Note: this was from a chase one year ago tonight, part of a large outbreak of tornadoes that occurred on this day]